september 19, 2012
This article is about the things I learned from the event.

Wednesday August 22 I and lots of other fansites/People was invited by EA to go on a "Play With Life Event" In Stockholm on Friday 7 September to get a first look at The Sims 3 Seasons.

I went at 9 o'clock in the morning from my little town to Stockholm. Around 11:30, I arrived and after about 20 minutes we all meet a happy little face that was Joyce. She told us that we soon could go in and in meantime we could go to the restaurant across the Little Theater (Lilla Teatern) and take a little drink if we wanted too (Some had traveled all the way from Norway and Finland to play)
Then after a moment, the door opened again and Joyce welcomed everyone in. 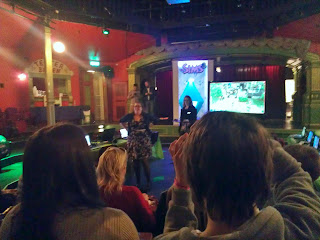 Joyce To The Left And Nicola Jenkins To The Right

The day started with that we sat down and watched when they showed us The Sims 3 Supernatural. After the little Supernatural demo we got informed that Graham would have a Seasons demo at 14:00. And after that we got to play Seasons.
Everyone rushed to the computers to play. The first thing i saw was the new loading screen which was divided into four parts. The first part was fall, Second Winter, third spring and fourth summer.
Then when the game was loaded, i made a family and saw some new hairstyles and lots of stylish outdoor clothing :) Graham also said that the version of the Seasons we got to play was Alpha so all the furniture/clothes that will be in the real game was not included.
When my family was finished i moved them into a house in Synset Valley. The first thing I did was to see how Online Dating worked and it was so that you had to create your Sims own profile. You get to choose their traits, favorites and zodiac sign (It doesn't have to be the Sim(s) original traits, favorites and zodiac sign. It can be fake ones if you want)
Then you could browse other Sims profiles and then send a date request. Then after a few days, you will get a response from the person you sent a request to. (This feature is not online so you don't need to worry about that!) 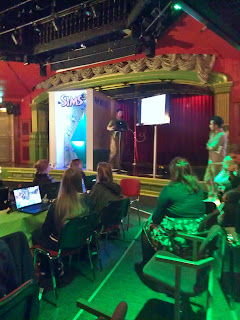 Cheats - It Will come some new features for the "TestingCheatsenabled true" cheat in Seasons. These features do so you can change global temperatures and change weather conditions in the world.
Buy/Build mode - There will be lots of cool new furnishings with Seasons. The furniture will fit well with both single sims and families. For example, there is a new shower/tub that looks awesome! There will also be a new construction feature that makes it easier for people who do not like to build houses. This feature is called "Blueprint Mode" and you get to choose between different rooms like: bathroom, bedroom and living rooms. Then you just take a room and place it on your empty lot or to your existing house.

Weather - Maxis/The Sims team has really worked hard with this expansion. The weather changes looks really realistic and doesn't appear like in Sims 2. for example, the snow doesn't just appear like in Sims 2. It instead builds up just like in real life. Even rain and hail will be chaning the ground dynamic and not just appear. It will also not appear worldwide, there will be spots where it isn't hail and rain puddles. another example is snow, because when it becomes spring snow will melt. But the snow won't dissapear like in Sims 2. It will still be some spots with snow piles left when the snow smelts.

Clothing - The Sims 3 Seasons, will come with some new stylish hairstyles, clothes, and a new kind of clothing for our sims. The new clothes is called "Outerwear" of course given because it's weather. There's even a hot-dog costume that is looks hilarious! (Graham worked at Volition before he worked at EA. Volition made Saints Row 2, which he got the hot-dog costume Idea from)

Festivals - A new big feature with The Sims 3 Seasonss is Festivals! Festivals are set in a park in all cities (the festival parks is different depending on which city you play in) When there is a festival in a park it will appear a big star thingy around the park icon that has the festival. Just to let you know when/where the Festival is held

Photos From the Event.
Press here to access all pictures

I want to thank EA, Joyce, Nicola Jenkins, Graham and everyone else who participated in this event. It was super fun! :) 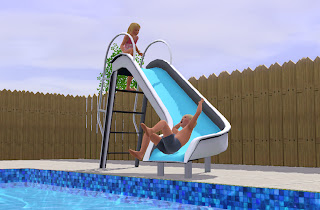 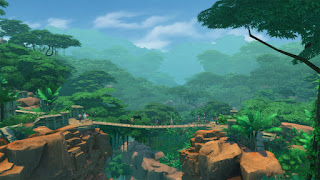 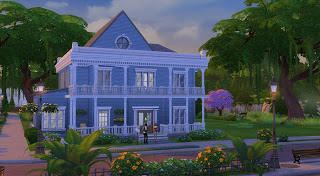